Skip to main content
You have permission to edit this article.
Edit
Home
News
Sports
Lifestyles
Opinion
The Griffon
KGSM-TV
e-Edition
Share This 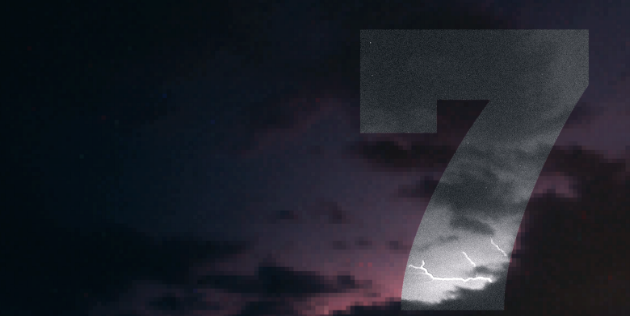 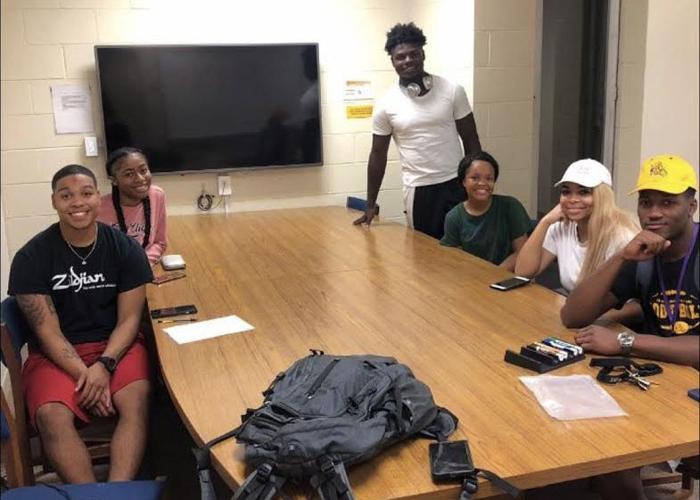 7 Thunders members meet in the library during the 2018–19 school year. Photo courtesy of Chandler Patrick. 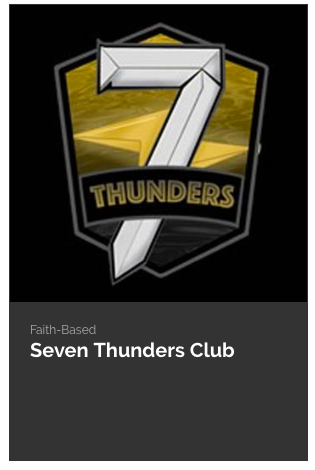 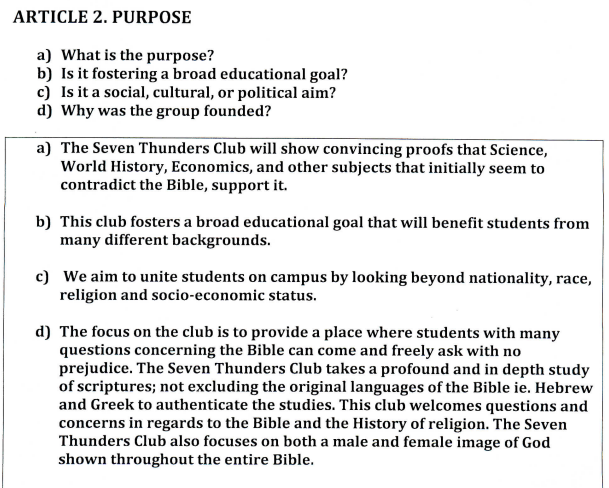 7 Thunders members meet in the library during the 2018–19 school year. Photo courtesy of Chandler Patrick.

You’re walking through Blum one night and a student approaches you. She asks if you’re religious and seems well meaning, so you answer her. She begins to tell you about a religious organization that she’s a part of on campus. She says that it’s a Christian denomination, but the longer she explains it, the less things add up. This is 7 Thunders.

7 Thunders, also known as the 7 Thunders Club, is a student religious organization at Missouri Western. 7 Thunders is the name used by some campus clubs connected to the World Mission Society Church of God, a religious movement that began in South Korea in the 1960s. Several major metropolitan campuses in Missouri have a 7 Thunders organization, including Northwest Missouri State University and the University of Missouri. While members say that they are like any other religious group, some students have accused 7 Thunders of being a cult.

Chandler Patrick is a sophomore at Missouri Western majoring in elementary education. She and her twin sister, Eryn Patrick, are members of 7 Thunders. According to Chandler Patrick, 7 Thunders is Christian non-denominational, and their main activities are volunteer work and bible studies. They are also known for preaching in areas like Blum Student Union and the food court, a practice that she says is no different from other religious groups on campus.

“In the Bible, Jesus says to preach the gospel to all nations,” Chandler Patrick said. “We follow in his footsteps, we make our efforts to do and follow what he says. That’s why sometimes you’ll see us in Blum, preaching and sharing the news about Christ to other people?—?because it’s really amazing, and Christ commanded us to do so.”

According to Chandler Patrick, God is key to that preaching.

“A core value is that we believe in the female image of God, heavenly mother,” Chandler Patrick said. “She’s love and she teaches us love. It’s testified about through the bible, which you’d have to come and see. You have to study to understand.”

“There is a line there where you can reach out to people and you can share, but if somebody really doesn’t want to listen to you, I think you also have to be able to respect that.”

Kyah Minner is the current president of 7 Thunders. Minner is a senior and an early childhood education major. She said that not everyone is open to their preaching, but she simply moves on.

However, not all students would agree.

Why do people think they’re a cult? What is a cult?

Some students say that 7 Thunders can be overbearing with their preaching and refuse to take no for an answer. The group is sometimes known colloquially as the “campus cult,” a moniker that Minner says comes from untrue rumors.

“I think people say that because they don’t know what it’s like,” Minner said. “If you have any questions or you feel anything about us isn’t right or isn’t true, just come ask us. We’re really nice people—we’re not scary or anything.”

“There’s no objective criteria that differentiates a cult from a religion,” Mathies said. “Really, it’s just a pejorative term. It’s a label that people put on it when they disagree with it, find it strange or mysterious, or they’re suspicious of it.”

Mathies said that sociologists of religion see the distinction as a matter of time and population.

“If you have a religious group that’s been around long enough, you stop calling it a cult,” Mathies said. “They say and think different things from what you’re used to. They may be secretive and keep to themselves. They live a different life than you know, things like that. From the Roman perspective, they would have had to apply that same word to Christians, or Hindus would have had to apply it to Buddhists.”

How do they compare to other religions and groups on campus?

7 Thunders have several tenets that separate them from other Christianity-based campus organizations. These include the belief that a man named Ahn Sahng-hong was the second coming of Christ. Sahng-hong was a Korean minister who founded Witnesses of Jesus Church of God, a group that split after his death. One half became the World Mission Society Church of God, the church associated with 7 Thunders.

There are several religious organizations on campus, including groups like the Catholic Newman Center, Buddhist Student Fellowship and Christian Challenge. Many of these groups are based in Christianity.

Wil Anderson is a campus minister for the Navigators, an interdenominational Christian organization that is a registered student organization at Missouri Western. According to Anderson, 7 Thunders should have the same religious freedoms as any other organization.

While Anderson said that he hadn’t seen enough 7 Thunders proselytizing to make a judgement for himself, he was aware of some students being concerned about their methods.

“I’ve heard rumors that they’ve been more like almost harassing,” Anderson said. “There is a line there where you can reach out to people and you can share, but if somebody really doesn’t want to listen to you, I think you also have to be able to respect that.”

Anderson said students should research to determine if a group has beliefs that align with their own. In regards to 7 Thunder’s beliefs, Anderson said that while he respected the organization’s right to a differing opinion, many of their beliefs do not align with traditional Christianity.

“Christianity would disagree; the Bible does not teach that there’s ‘God the mother,’ it does not teach that you are saved by taking covenant Passover. It would disagree that Christ Ahn Sahng-hong is the new savior,” Anderson said. “What has Christianity taught about the same sorts of issues? Just be able to hold those two things up and be able to evaluate, ‘What do I think is actually true? What does the Bible actually teach?’”

According to Anderson, while 7 Thunders might use actual bible verses, the source material could be misinterpreted.

“What I’ve witnessed is, oftentimes, the 7 Thunders Club will take a particular verse and they won’t exactly show how it fits into the whole passage,” Anderson said. “I would just say, read the Bible for yourself and read everything in its full context.”

Anderson is not alone in seeing a disconnect between 7 Thunders and some mainstream Christian ideas.

Adam Woodrum is a junior at Missouri Western. Woodrum said that he had been approached by or engaged with 7 Thunders about five times over the past two years. Part of the reason he had encountered them multiple times was because of his involvement with various Christian organizations on campus. Woodrum said that the majority of Christian organizations tend to agree on basic tenets?—?such as the trinity of the father, son and spirit?—?but that 7 Thunders stood out.

“They believe in a different Christ than we do. They believe that Christ was reincarnated as a man from North Korea,” Woodrum said. “Not that everyone isn’t free to believe what they want to believe, but it’s just actively kind of undermining us.”

While he hadn’t experienced any kind of altercation with the group, Woodrum said that this disconnect in beliefs could be uncomfortable at times.

“Some of us get frustrated,” Woodrum said. “You know, we really value our beliefs and see this group calling themselves what we call ourselves while just not believing the same thing.”

What are they allowed to do?

Nancy Nelson, the developmental reading program coordinator at the Center for Academic Success, was asked to be the faculty advisor for 7 Thunders this semester by her student assistant, Chandler Patrick. Nelson agreed but stepped down from the position a few weeks later after attending a meeting.

“They were very, very friendly,” Nelson said. “They look like they have a lot of fun, which they certainly do.”

However, Nelson said that she was unable to fill the advising role due to time conflicts.

“My reason for quitting was because of family dynamics,” Nelson said. “My husband and I talked about it—all aspects of it—and felt that at this time it was not a part of what fit in with our timeframe.”

Organizations that do not have advisors lose privileges, such as the ability to reserve rooms for meetings. Existing reservations are purged at that time and cannot be made until a new advisor is found.

In the meantime, 7 Thunders have the same privileges on campus as any outside group. According to campus police chief, Jill Voltmer, Missouri Western’s public campus gives groups the opportunity to gather regardless of whether they are a registered organization.

“Blum Union is a public building, so unless we have complaints, it’s not something we address,” Voltmer said. “Everybody is awarded the right to free speech and free religion, so it’s a delicate balancing act.”

While they might seem shrouded in mystery to some, it’s hard to miss the presence of 7 Thunders on campus. Even without an advisor, members continue to spread the word about their group to students. If you haven’t seen them before, maybe you’ll see them soon.