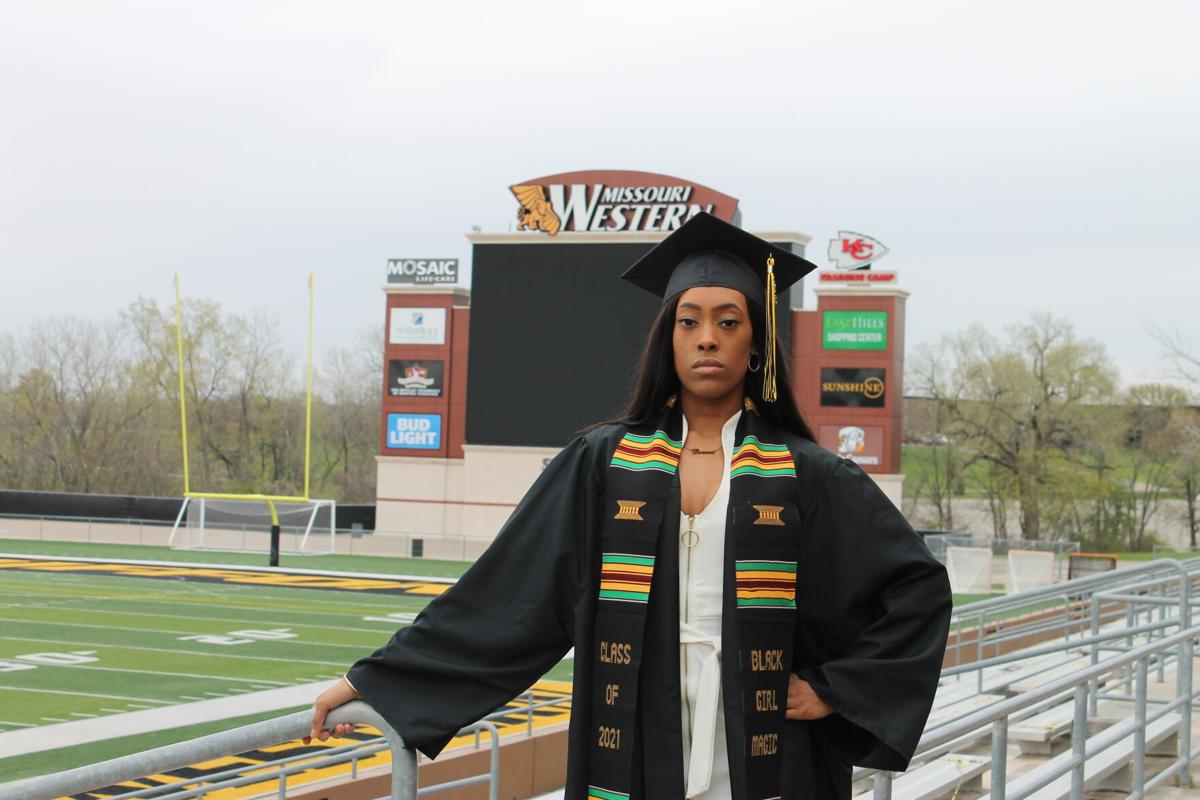 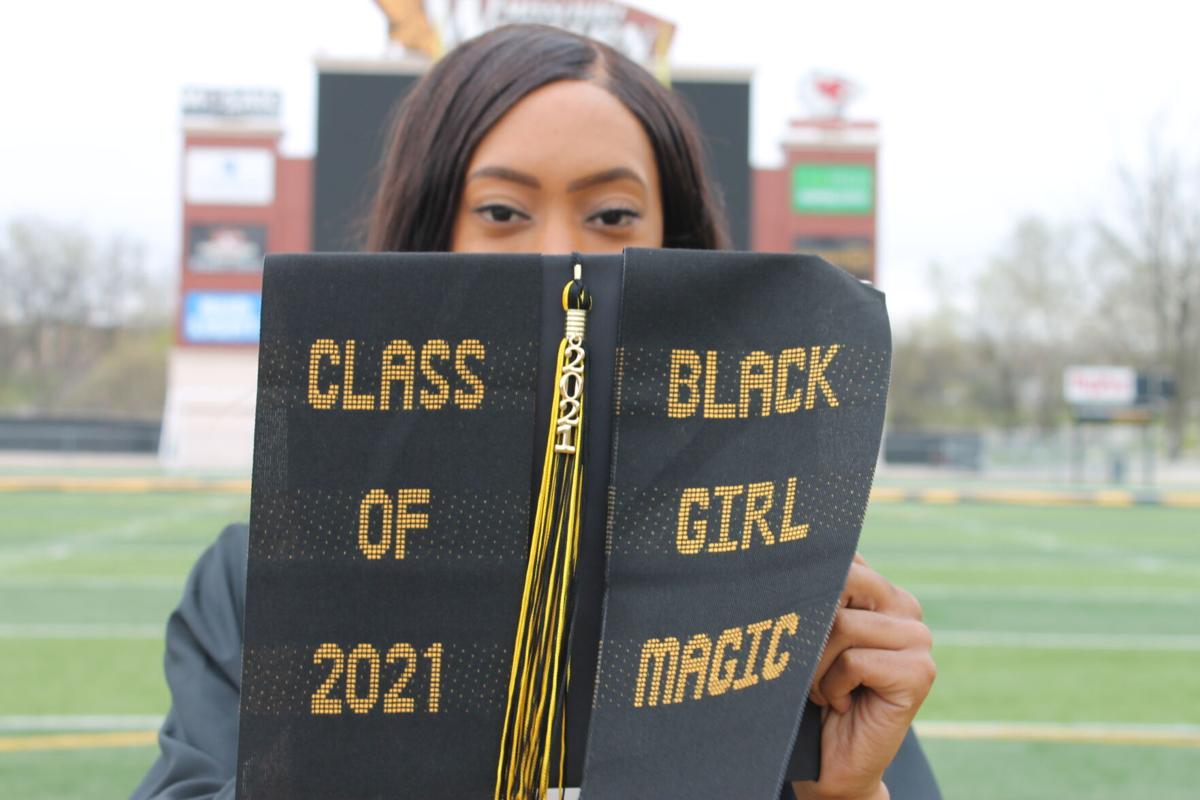 On May 8, senior Briana Reed will have the honor of representing her graduating class as the commencement speaker.

Despite a successful academic career, Reed's journey as a Griffon hasn't always been a clear path. Initially, the journalism major had no intentions of even attending Missouri Western. If it weren't for her mother, she most likely would have never stepped foot on campus.

"I didn't have plans to come to Missouri Western, but my Mom wanted my twin sister and me to stay close to Kansas City. We wanted to stay here for about two years and then transfer to a major university," Reed said.

As a freshman, everything changed for Reed when her friends decided to start their very own dance team.

"A few of my best friends founded the Missouri Western Dance Company, and that's what led me to stay because I started building relationships within the dance company and throughout campus," Reed said. "I didn't want to have to go somewhere else, meet new professors, new people, and start all over again."

Although Reed was unable to escape Missouri as planned, she discovered freedom through her passion for dancing.

"I enjoy dancing because it allows me to be different versions of myself, similar to acting," Reed said. "I get to let go and be free. I love the costumes. I love the music and the adrenaline I get when the crowd starts screaming while I perform."

After discovering a sense of community at MWSU, Reed still faced an important decision regarding her future career path. As an undeclared nursing major approaching her junior year, she recognized that it was time to make a big move.

"My mentor suggested that I fasted and prayed for three days to figure out which path was right for me. The fasting process is what led me to journalism," Reed said. "A lot of different signs added up that I had never noticed before. All of my friends were strategic communication and journalism majors. I was always in Murphy, which is the department of communications. Those little things contributed to my decision to join the journalism department."

Reed quickly realized that journalism was the right choice when she began her coursework.

"I took yearbook and intro to digital photography, which both honed my skills. I focused on the photos and videography first, and then I started enhancing my writing," Reed said.

Reed believes it was these classes that contributed towards her stepping out of her shell.

Alex Rodriguez 'not thrilled' about Jennifer Lopez and Ben Affleck

"At first, I was timid to interview people that I didn't know. In the journalism department, they force you to put yourself out there because that's what you'll be doing for the rest of your life," Reed said.

As a senior, Reed has had the opportunity to serve as the head anchor for the new student-led KGSM-TV.

"I want to be a news anchor in real life, so this has given me the privilege to sit in front of the camera and work on my reporting skills. There are so many things behind the scenes that students don't get to see. It's a chance for students to get their feet wet and experience what it is like to work in an actual news station," Reed said.

When it comes to other students stepping out of their comfort zones, Reed offers some helpful advice.

"I would encourage students to branch out and talk to people, starting with your roommates and suitemates. If you can make connections with them, you will be able to meet their friends as well. It's okay if you're a shy person, start small and don't feel as if you have to get to know the entire campus at once," Reed said. "Discovering what you're interested in and enjoy is essential. If you aren't able to find an organization on campus, Missouri Western allows students to develop new ones. Don't let the lack of an organization be the reason you don't get involved."

Years of dedication and hard work in the journalism field have led to Reed getting the recognition she deserves. Recently, at the SOAR awards, the Dean of Students announced that Reed would be the commencement speaker for her May 8 graduating class.

"I was shocked, and I had no clue that I won. Currently, I am working on my speech. I've never spoken in front of that many people before, and I want to make it right. I want to make sure that it's something I am proud of," Reed said.

Briana Reed has every right to be proud of her time at Missouri Western. Her list of involvements includes serving as the Secretary and Chief of Staff for the SGA and Co-Coach of Missouri Western Dance Company. She is also a member of the National Society of leadership and success, Delta Sigma Theta sorority, the Society of Collegiate Journalists.

While these accomplishments are a testament to Reed's incredible work ethic and drive, she admits that it wouldn't have been possible without encouragement from the University.

"Missouri Western has always led me down what they felt was the best path for me, and they never forced me to do anything I didn't want to. I have the full support of my friends and faculty, and they've allowed me to head in whichever direction seemed best. I've felt very open and able to stay true to my character," Reed said.

When Briana Reed speaks at Spratt Stadium on May 8, there is no doubt that she will serve as an inspiration to both her classmates and future Griffons. Reed's story is undeniable proof that it's never too late to spread your wings and find your calling at Missouri Western.

Sorry, there are no recent results for popular images.