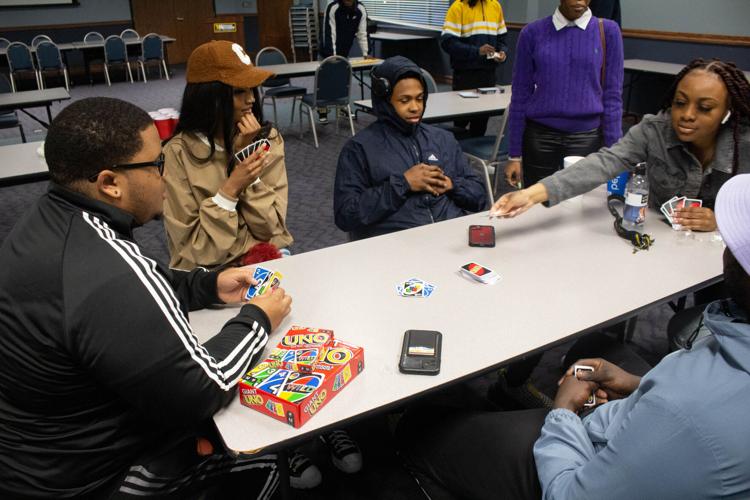 Students play against each other in a game of UNO at the Alpha Game Night. This event was held in Blum 222. 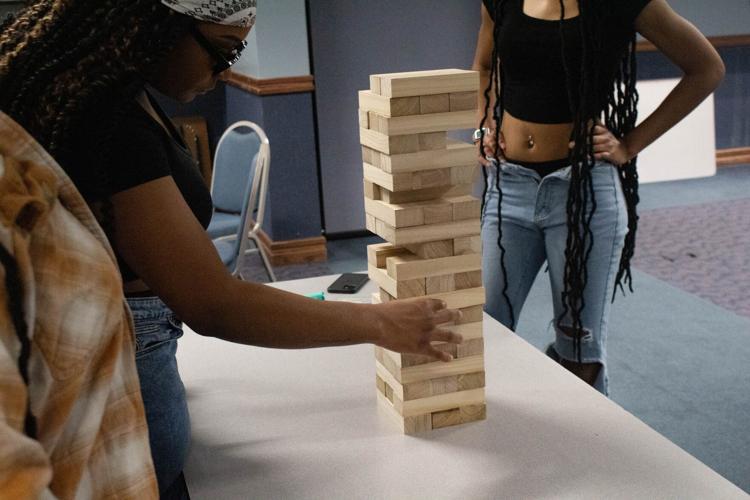 A student concentrates on pulling a block out in a game of Jenga. This game was played at the Alpha Game Night which was held on Monday in Blum 222.

Students play against each other in a game of UNO at the Alpha Game Night. This event was held in Blum 222.

A student concentrates on pulling a block out in a game of Jenga. This game was played at the Alpha Game Night which was held on Monday in Blum 222.

The men of Alpha Phi Alpha Fraternity hosted Alpha Week from March 28 to April 2nd. They wanted to come out and provide educational and fun events, like 90s game night and a barbeque, for the Missouri Western student body.

Josh Rencher & Garland Polk, members of Alpha Phi Alpha fraternity, talked about the creative process of coming up with the events for Alpha Week and the challenges of getting these events together.

“Over time, we just took people's ideas from the school, and you know, we just kind of went as a collective and then just kind of put those events together,” Polk said. “I know that COVID around a lot. So you know, it's kind of limited to throwing events on campus. So we do what we could to just, you know, try to bring everybody out of the dorm rooms at the same time.”

During Alpha week, the 90s game night was the most popular. It was a great way to start back after spring break, and the turnout of students was good to see. It was so enjoyable for students to listen to 90s classics while playing fun games.

During any event, there is a goal that the sponsoring organization wants to achieve. In talking with Garland Polk and Josh Rencher, they expressed what Alpha Phi Alpha's goal was and what they believe the key is to a successful Alpha Week.

“With this, we really want to focus more on, you know, having fun but educational at the same time because like we say we party hard,” Rencher said. “We stay up late, most of all, we do graduate and so with everything we do, and the way we planned it, we just want everybody to have get more educated on things that go on in life like sexual education, you know, I'm saying empowerment of women. And just after all, the educational part, you know, has fun at the same time so we just hope everybody comes out to learn and have fun.”

The men of Alpha Phi Alpha accomplished a successful week of events from sexual education, community service, queen empowerment, 90s Game night, and, lastly, a barbecue for the students.

To Rencher and Polk, being an Alpha Man means holding themselves accountable for their actions and having high standards. Their organization strives to work towards strengthening the community and each other every day.